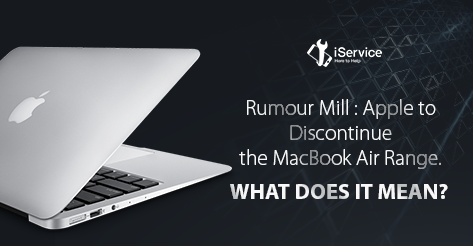 Is there a new upgraded MacBook air coming up this year? Or, is Apple calling it quits with the MacBook Air line of laptops? Will the MacBook Pro replace the Air? There are a lot of questions that still have no solid answers from Apple.

The rumors are slowly starting to materialize with the current market scenario of the brand. First, when the brand released the Air, it was considered an overpriced model, but then again, no Apple product comes cheap! The main concern was the fact that the specifications were not the best in the market to meet the needs of a professional, for business uses. But the product line was projected to be something that was crafted for business. This lead to several critics feeling that the model was a tad bit overpriced for the features and thus it was not considered a great value for purchase.

This was not the only blow, with the launch of subsequent models, there was also an observed reduction in the sales of the 11-inch version of the Air. While Apple was taking a hit in the smartphone segment and sliding down the ladder and seeing reduction in sales and market shares for the first time, the laptops were also seeing a slow fall in the sales. Apple quickly responded to this and came up with an upgrade. But even then, the upgraded Air came just with minor processor changes and RAM upgrades. The much anticipated inclusion of retina display in the laptop line was not done. Instead there was the new Retina MacBook line. Things have remained a mixed bag for the brand and no model in the laptop segment has been able to make a significant mark.

The Pro came more as a replacement than as a separate product line:

While all that was happening, Apple brought in the MacBook Pro line. During the introduction of the model, it was continuously weighed against the Air, in terms of weight, form factor and performance. And in the list of the future lineup of laptops, Air was not seen or spoken about. This was the first indicator that caused rumor enthusiasts to talk about the discontinuation of the Air line of laptops.

The 11-inch Air was the first one to be dropped and rumors stated that this would not be the only Air laptops disappearing, the whole line would soon vanish. There have been Pro models of various form factors released so far to cater to various segments. Apple now also seems to focus more on the MacBook and MacBook Pro model than on Air as there has been no news about any upcoming upgrades in Air. But one other factor that is lightening the intensity of these rumors is that recently a sudden price cut in the existing Air laptops has been observed. Several retailers including online retailers have started offering the MacBook Air at a reduced price. Such a price reduction is seen to occur mostly before the introduction of a new model in the same product line. This has led to the belief that there is going to be a new model of the MacBook Air that might be coming up in the next 1 or 2 months. But then what would the features of the new MacBook Air be? How would it be priced? Is there really a new model of the MacBook Air coming? These are for Apple to answer.

Would Apple focus on iPads than the laptops?

Some of the remarks made by Cook in the Apple conferences and some of the upgrades and features included in the iPads denote to some extent that the brand might soon focus strongly on the iPad segment than on the laptop segment. Cook had also emphasized about how smartphones and tablets are replacing desktops and laptops as well. The laptop segment has not been the strongest for Apple so far. And in today’s market, with the gain in the momentum for the demand of convertibles, that pack stunning computational capacities and also deliver the convenience of a tab, The MacBook Air’s closest alternative is the recent Pro range of iPads. These are found to carry better specification and computational capacities than even the laptops from the brand. And the smart keyboard dock that comes along, makes it a welcome replacement to the conventional laptops. There has been news that Apple is reducing the production of laptops this year by 16% Air being a significant part that is reduced.

Wrapping up, it still remains an open question for Apple to confirm whether we are going to get a new Air or no Air at all. While we wait for the answers to all these rumors, for any of your MacBook service queries, get in touch with us.