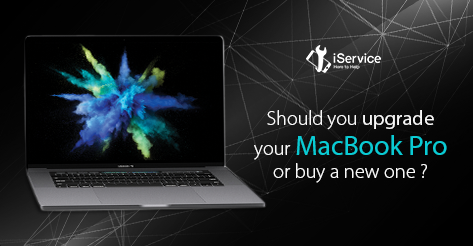 “Should I upgrade the MacBook Pro I have or just go ahead and buy a new one?” It seems to be a burning question on a lot of people’s minds and not just of late. And quite frankly, it’s not an easy question to answer. But there’s a very good reason behind all of this, particularly in the fact that pretty much any MacBook can be termed as a very long-lived product. This means that a MacBook from as early as about 2011 could possibly last you all the way up to about 2015-2016. And that’s quite brilliant especially if you’re considering value for money. It’s also a stark contrast to a majority of Windows laptops that barley last you through 2 years.

But there always comes that one point on the cross roads where you actually feel the need to make that change especially when you’re running dated tech. And while that’s okay, your wallet tends to have other ideas since a MacBook isn’t the most affordable thing on the market especially if you’re considering something like the MacBook Pro. While the model isn’t exactly “Future proof” it can set you apart for a few years also depending on your OS. But to answer that burning question, it’s best to break it down on the basis of the model you run.

We’re going ahead and omitting anything from 2014 onwards since the RAM chips are usually soldered onto the motherboard, therefore removing any possibility for an upgrade. Let’s also accept the fact that the chances are you’ve probably already future proofed yourself by going ahead with the beefier version of the MacBook Pro. There really is no scope for an upgrade as you’re also running a model with the Retina Screen with RAM and an SSD that’s more than capable of handling the latest OS Apple rolls out.

IF YOU’RE RUNNING A MACBOOK PRO FROM 2012

This is where you’ll find yourself in a bit of a conundrum. As you’re probably aware, not only is your MacBook Pro “old”, but there’s a high chance it would struggle with newer software updates. At this point you’ll start to wonder if it really is worth keeping your old MacBook or just going in for a new one. While your existing MacBook may be able to hold its own, there’s no doubting that it’s going to have a hard time keeping up and for good reason too. With that in mind, you’re presented with a choice besides jumping into a conclusion to buy a new one.

The most affordable option would be to consider an upgrade. For example, if you use the 2011 MacBook Pro, you could consider a bunch of customized upgrades such as adding better RAM chips and also upgrading your hard drive from a 5400 RPM to 7200 RPM. You could also replace the existing DVD-Drive (Who uses these anyway?) with a primary SSD to make your processes silkier and smooth. All of this can be done for just a fraction of the price of a brand new MacBook Pro. Do keep in mind that this upgrade is solely for what we’d ideally describe as power users (Where even the fraction of speed and performance counts).

IF YOU’RE RUNNING A MACBOOK PRO FROM EARLIER THAN 2012

It’s best not to get into the details with this. It’s probable that your MacBook Pro still uses core 2 duo processors which quite frankly won’t support the extended processes of the extra RAM or the functionalities of an added SSD. That coupled with the fact that Apple has quite possibly already phased out your MacBook Pro model already. You could consider selling your MacBook Pro for some value at least.

It can be noted that if you’re running a core i5 Processor on an older version, you could still opt for the upgrade but the changes will be more of a novelty than anything else. But it’s something you could consider if you don’t have the funds.

In the end, your decision to either upgrade or purchase a new machine will ultimately come down to your financial ability. But if you’re looking for the best value, you should consider the upgrading process as it can surely enhance your devices lifecycle. What more could you ask for than upgraded RAM and a better Hard Drive? Be sure to visit iService as we provide you with exactly that.