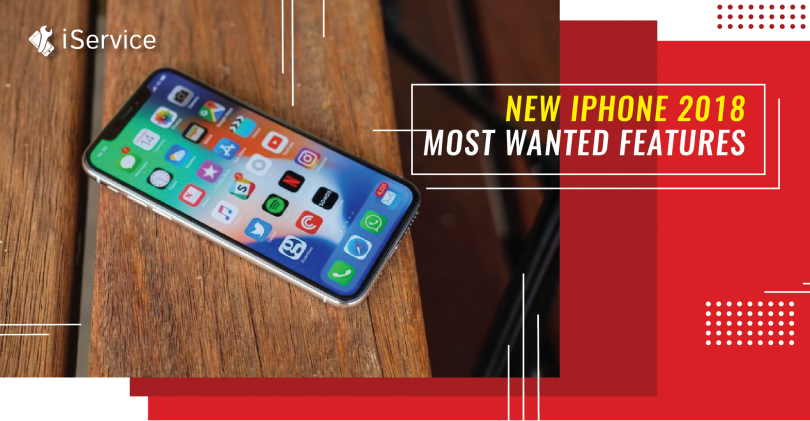 Things have been a little silent for a while for Apple. There haven’t been any sensational new releases and the WWDC 2018 did not have much information about the upcoming hardware releases. In such a situation all that we know is that new iPhones are expected to hit the markets around the world beginning September.

With the smartphone market seeing so many new releases every now and then Apple does have to introduce several new features to keep up in the race. For the iPhones to be launched in 2018 and the months to come here are a few features that users would love to see –

Tweaks in the Face ID feature

Face ID has been a great new addition in the iPhones. But there are many who still face issues with the speed of response. There are also many who complain about the failed attempts to unlock the iPhone in poor lighting conditions. Improved Face ID is definitely something that can save iPhones from criticisms. Wider angle apertures for the front facing cameras and improved performance under extreme levels of ambient light intensity would make things better.

With the features adding up in terms of the hardware and with iOS updates bringing several new functionalities an improved battery life is something that every user is longing for. Including more powerful and faster processors are good but choosing energy efficient processors would be even more convenient for the users. Another good option would be to include a default fast charger. This would help users save the money spent on buying the fast charge adapters separately.

Front facing cameras have been great on the iPhones and even the popular Portrait mode has been included in the front camera. But the resolution of the front facing camera on the iPhones has always been very much lower than that on the other top smartphones. Popular smartphones these days are focusing more on the selfie camera and there are many that even feature dual lens for the selfie camera. Some of them come with front flash and so many other features which are even better than the rear camera features. So iPhone has a lot to catch up on in the selfie camera area.

Better adaptation for VR based apps

VR compatibility has continuously been improving on the iPhones but this is an area where several Android smartphones overtake even the best iPhones. Apple has started its focus on AR with the release of ARKit 2 and since then the focus on VR has been shifted away. If Apple introduces new VR goggles and better VR capabilities it would definitely do the brand a lot of good.

Shatterproof screen is something that many of the popular smartphones come with in the recent times. Drop tests are where most iPhones fail badly. Of what use would a phone be if it cannot sustain a few drops! iPhones of today are undeniably better than the older iPhones in terms of the build quality but there is a lot of room for improvement. With all glass exteriors making a comeback to accommodate wireless charging, making this a shatterproof glass would be more practical.

Features which are least likely to be included

As iPhone dropped the fingerprint authentication altogether with the introduction of Face ID there have been many users who have expressed their disappointment. If fingerprint sensor could be packed in the upcoming iPhones in addition to the Face ID feature it would be a great new update.

Most smartphones today support dual SIM and this is one feature that iPhones do not offer. It would be great to have such a high performance phone with dual SIM slots.

You would have to shell out several extra bucks if you want more internal memory. So if iPhones could ever come with expandable storage users would definitely have something nice to rejoice about. If that is not possible with iPhones at least a price cut in the iCloud storage would be good news.