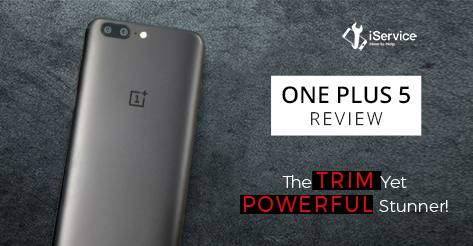 It has been hardly few days since the OnePlus 5 from the Chinese smartphone company was launched. In India this one is coming on the 22nd of June as an Amazon exclusive. The OnePlus 5 has been a much anticipated model form the brand that grabbed the attention of the experts by successfully establishing itself with its digital only approach.

First look- the design of the iPhone.. er…One Plus 5:

It is hard to find a sleek smartphone today that doesn’t resemble the iPhone in some way. The OnePlus 5 is no exception and in fact it is hard to tell it apart from an iPhone especially the back surface. At the back it comes with an elegant mate finish bearing the brand logo at the center. There is a dual camera with flash at the top left corner, again similar to that in an iPhone. The front face of the phone is clean with a single physical button which is also the fingerprint sensor and 2 capacitive buttons on either sides and is very much similar to the other OnePlus phones. This one however, comes with a wider screen which is also better to hold. The antenna lines, the volume rocker buttons and many other aspects of the design would again remind you of iPhones.

What’s under the slim and slender hood?

The technical specs of the phone is one thing that makes this one worth all the attention it is receiving. There is so much packed in its slim and slick form factor:

The OnePlus 5 runs smooth and even heavy games and apps run without any lags thanks to the powerful processor and GPU. The RAM is also one of the best in the segment and so the phone multitasks like a pro. Carrying another similarity to the iPhones this one comes with a non-expandable storage, but you have two options to pick from. The 8GB RAM model with the 128 GB internal memory is clearly a worthy investment. The response of the phone is what sets it apart from most of its competitors. This phone has been found to excel in most benchmark tests.

Say cheese- this one comes with a great camera:

Talking about the primary camera, 16MP sensor comes with f/1.7 lens and the 20MP telephoto sensor comes with f/2.6 lens allowing the camera to capture some great portrait photos with a DSLR-like soft blur to the background. The pictures captured come with some stunning details which can be seen in cropped images especially in natural light. But the wide aperture of the lens causes a mild glare in shots taken in bright light. The front camera of the OnePlus 5 comes with a front flash as well to help the phone join the “selfie-champions” league. The front camera performs great both for selfies and for video calls. The fact that the camera misses an image stabilization feature is a turnoff however.

So is it worth the wait?

If you have not used a OnePlus phone so far, the OnePlus 5 is sure to give you the best impression about the brand. The phone comes with Android Nougat preloaded and the software runs pretty consistently with daily use. With reliable hardware that is future ready, it is definitely a phone that is going to provide tough competition to the other ones in the segment especially with the price tag it carries. And that’s always been OnePlus’ strength.