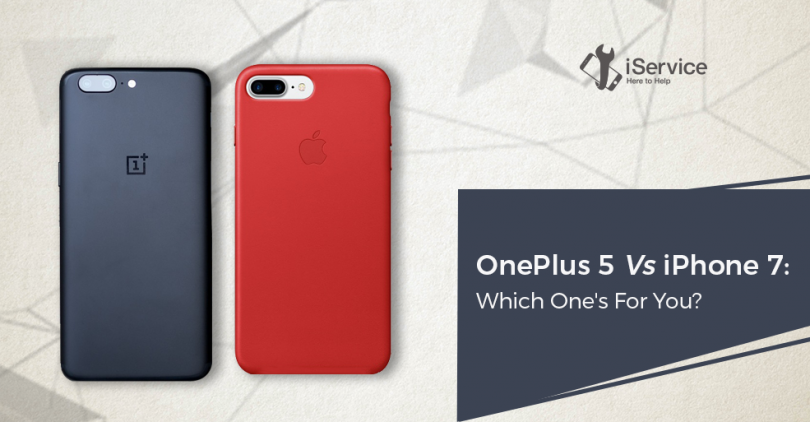 The OnePlus 5 and the iPhone 7 – these are two successfully running smartphones that look so much similar. But are they also similar in terms of their features and the performance? There is a neck-on-neck duel between the two but which is the one that would suit your demands? Should you settle down for the OnePlus 5 without depleting your bank account or should you splurge on the iPhone 7? We pit the OnePlus 5 vs iPhone 7 to see which one’s for you.

Take a quick glance when it comes to the OnePlus 5 vs iPhone 7  and you would think you are looking at the same model. In terms of design, OnePlus 5 draws a lot of inspiration from the iPhone 7. Both the phones come with primary camera positioned on the top left corner with OnePlus 5 featuring a dual camera like that one the iPhone 7 Plus. The physical home button is circular on the iPhone 7 and an oblong oval one on the OnePlus 5. This button doubles up as the finger print sensor in both the phones. OnePlus 5 comes with a Corning Gorilla Glass for added protection.

Winner: OnePlus 5- because of the slightly larger screen and the protective Corning Gorilla glass.

Both the phones perform decently when it comes to clicking pictures in natural light. iPhone’s powerful image stabilization technology and wider aperture shows in the low light images captured which are slightly better than those captured by the OnePlus 5. But OnePlus 5 comes with dual lenses which help click better portraits with blurred background. Both the phones can record 4K videos of great quality. The Quad LED flash on the iPhone is brighter than the dual LED flash on OnePlus 5. On the iPhone 7 there is a Sapphire crystal lens cover included to add a layer of protection to the 6-element lens. There is also a rear illuminator sensor built in.

OnePlus 5 wins in terms of the front facing camera and can take better selfies.

Comparing the performance of both the OnePlus 5 vs iPhone 7 is more like comparing apples and oranges as the difference in the operating system itself comes first. Then comes the difference in the hardware. Though iPhone comes with a smaller 2GB RAM, the 2.34GHz 10 Fusion chip is pretty fast. iPhones have always boasted of very little to no lag and this one is no exception. The powerful 2.45GHz Octa-core processor on OnePlus 5 comes either with a 6GB RAM or 8GB RAM. Both of them multitask like a pro without any glitches. Running heavy games and apps appears quite similar on both the phones. In terms of the overall performance both the phones are close contenders. But one factor that sets the OnePlus 5 apart is the battery which is a 3300mAh non-removable battery. There is also the Dash charge feature for faster and more efficient charging. On the iPhone 7 however the battery is merely a 1960mAh. A single charge can last pretty long with normal use of the OnePlus 5 while the iPhone 7 with its powerful hardware struggles to last a day.

The price of OnePlus 5 starts at Rs. 32999 while the iPhone 7 starts at Rs. 48999. This is quite a gap and could prove a considerable factor when deciding.

Winner: Overall, we find it very difficult to conclude a winner when considering the OnePlus 5 vs iPhone 7. Each one comes with its own set of benefits. And both the phones are powerful, smooth, take great pictures, and come with future-ready hardware as well. The pricing is definitely one area that sets the OnePlus 5 ahead of the iPhone. So which one are you buying next- the iPhone 7 or OnePlus 5?