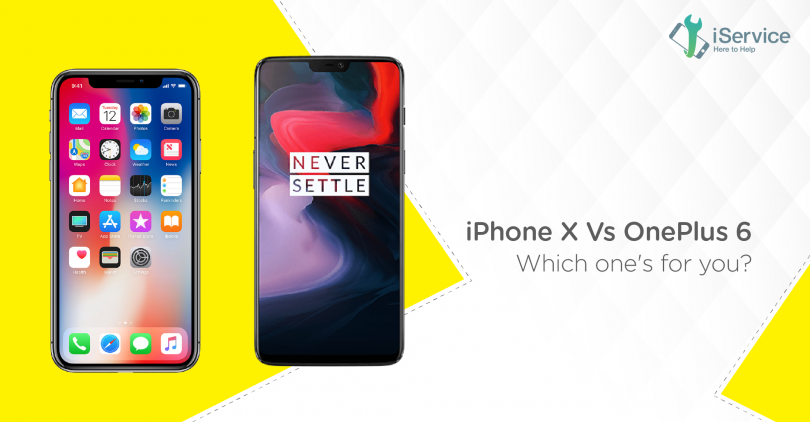 The iPhone X has been around for a while whereas the OnePlus 6 is a new entrant in the market. iPhones always have a special place among the tech-enthusiasts. Being one of the most talked about iPhones the iPhone X has a lot of cool things to boast about. But one cannot ignore the hefty price tag. So does the less expensive OnePlus 6 match up with the iPhone X? Which among these two would be a better choice for you?

The iPhone X is one that made a buzz for the refinement in the design and the lack of Home Button. OnePlus 6 also features an all-screen design. One notable similarity between the OnePlus and the iPhone X is the notch at the top housing all the sensors and the front camera. Talk about the notch, this is one thing that many hate about the iPhone X design and to tackle this OnePlus 6 has added a simple feature. The notch is relatively smaller on the OnePlus 6 and you also have an option to add dark flanks on the top portion of the screen so that the notch doesn’t stand out.

While the iPhone X has a smaller 5.8inch OLED display, the OnePlus 6 sports a 6.28inch Optic AMOLED display. Though you would find glass at the back of both the phones, on the iPhone X it enables wireless charging which is a feature that is missing on the OnePlus 6 which comes as a disappointment to many. Both the phones come with basic water resistance and a few splashes would do no harm.

Though the OnePlus 6 is a larger phone it weighs nearly the same as the iPhone X. In terms of the display quality iPhone X display definitely has an edge over the OnePlus X in terms of the colour reproduction and the definition of the details.

Winner- iPhone X with its crisper and clearer display quality though the OnePlus X is better for those who prefer a larger display and for those who cannot live with the notch on the top!

In terms of the camera resolution OnePlus 6 makes a clean sweep with its 16+20MP primary camera and 16 MP secondary camera. The iPhone has a 12+12MP dual rear camera and 7MP secondary camera. But iPhones have always carved a niche for themselves in the field of smartphone photography. TrueDepth technology results in better selfies with various modes as well. Much like the iPhone X there is a Portrait mode included in the OnePlus 6 as well.

In terms of the camera, with basic exploration of the features both the phones perform somewhat similarly. The iPhone has a slight edge over OnePlus 6 in terms of the low light performance.

The OnePlus 6 has a battery of a larger capacity. This one does perform pretty well for a smartphone with the given screen size in the Android segment. But after a full charge if you compare the battery life of both the phones under similar operating conditions the iPhone X performs slightly better.

There is indeed the difference that the operating systems offer. But in terms of the general performance both the phones are on the same level. The OnePlus 6 is quite fast with its Qualcomm Snapdragon 845 processor and 8GB RAM (there is also a 6GB variant).

In terms of multi-tasking both the phones show not the slightest lag, even when there are multiple processes open in the background. iPhone X comes with a 3GB RAM which is quite good for an iPhone.

One thing that stands out on the OnePlus 6 is that it comes with a fingerprint scanner though facial recognition is also built in.

This is one area where there is a striking difference between the two. The OnePlus 6 price is nearly half of that of the iPhone X.

Though the iPhone X is indeed one of the best iPhones in the competitive smartphone market Apple still has a long way to catch up. The many cool features that the iPhone X has have already been introduced in many other smartphones with a much lower price tag. But of course, the security that the iPhones are generally known to offer cannot be forgotten.

The OnePlus 6 is quite similar to the iPhone X in many aspects. And it has also come with a lot of design changes in comparison with its predecessors. The fact that it has retained fingerprint authentication is something we love and the fact that it has missed out wireless charging is something we hate. Would you need the clarity in details given by a Retina display or would you need a larger screen? Would you love crystal clear pictures or are you looking for larger megapixels? So if you are buying a new smartphone, which one would you choose?