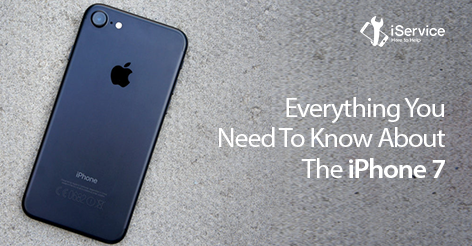 On September 7th, the world saw the launch of the latest iPhone, at the Bill Graham Civic Auditorium in San Francisco. Although there was a lot more to take away from the event, here’s everything you need to know about the new apple iPhone 7.

Both iPhone 7 and 7 plus are water and dust resistant. The whole thing is sealed, and the IP67 rating means there aren’t really any holes for sand and grit to hide in. The waterproof seals will keep the delicate inside bits safe from moisture, so you won’t get caught short in the rain either.

The two new devices maintain the same aluminum body and don’t look a ton different than 2015’s iPhone 6 and 6S Plus. They even share the same respective screen sizes: a 4.7-inch display on the 7, and a 5.5-inch screen for the 7 Plus. The Plus sports a resolution of 1,920 x 1,080 pixels, and its smaller brother packs 1,334 x 750 pixels. Both screens are 25 percent brighter than the 6S and display a wide color gamut.

So the rumors turned out to be true. The iPhone 7 and 7 plus no longer feature a 3.5mm headphone jack. That extra space, although minimal, is being used to pack extra tech into the iPhone 7. That’s clear from the dimensions of the phone – the lack of a headphone jack hasn’t made the iPhone 7 thinner, it’s still 7.1mm much like the iPhone 6s.

To make up for the missing headphone jack, Apple is including a pair of Lightning-connected Ear Pods in the box and a Lightning-converter for your 3.5mm headphone plug. The big downside: you cannot charge your phone and listen to music at the same time.

Let’s start with the normal iPhone 7, seeing as its one part of the system on the 7 Plus. The 12-megapixel camera officially features optical image stabilization, a 28mm wide-angle and a high-speed sensor that’s 60 percent faster than before. It’s also 30 percent more energy efficient. The camera can detect faces and bodies and offers wide color capture. There’s so much more going on when you take a shot, such as white balance, noise reduction, and combining multiple images.

On the front of the phones, the selfie camera on the 7 and the 7 plus has jumped to 7 megapixels, and also features wide color captures and automatic image stabilization. The iPhone 7 Plus has a better rear camera, though. It uses the same camera as the iPhone 7, but there’s another 12-megapixel camera next to it. The iPhone 7 Plus is the first iPhone with a dual-camera system.

The iPhone 7’s new base-level storage is now a sensible 32GB, with the other editions offering 128GB and a new 256GB of internal space. 256GB is a lot for a phone – more storage than most of Apple’s laptops, in fact.

The home button is pressure-sensitive, including “taptic feedback”, which just means that apps can give you three levels of pressure and haptic feedback, like a light or strong buzz. It doesn’t feel like a button and definitely takes getting used to, but so far it seems to get the job done.

The iPhone 7’s new A10 Fusion chip is a 64-bit, quad-core processor that Apple says is 40 percent faster than last year’s A9 processor. Two cores are high-performance, the other two are “high efficiency,” which means they’ll conserve battery while handling tasks. This creates the path for deeper visual graphics, especially with gaming.

Hands on, the iPhone 7 feels a lot like its predecessor, iPhone 6. But the key updates to battery, faster performance, water resistance and camera could make all the difference that Apple needs at the moment.

For all things “Apple” stay tuned to our blog. If your device is in need of repairs, check out our website.