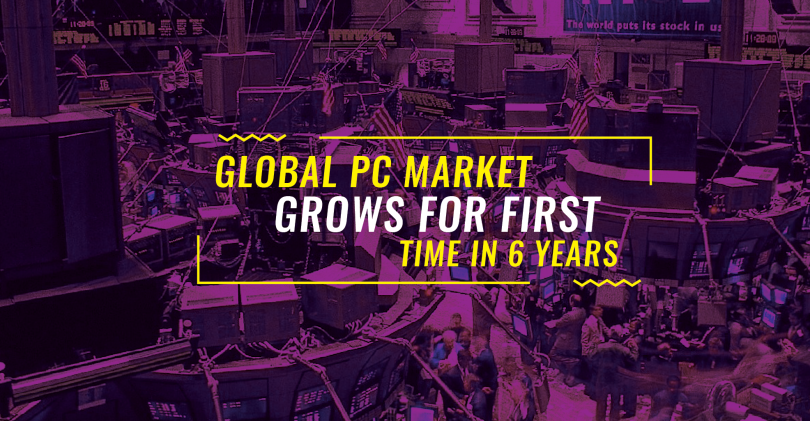 The way people use their computers and the time spent on them have significantly reduced. Even today in the workplace scenario the situation is much better than in the average consumer market. Smartphones come with superior computational abilities and there are large screens. For those occasions where a larger screen with keyboard is required at home there are laptops and tablets. The best part about these is the portability. So you do not have to start fresh- you can simply pick up from where you left and carry your work anywhere you go. All this convenience caused a huge decline in the sale of computers.

The past 6 years have been tough for the computer manufactures. There was even a time when there were speculations that desktop computer would soon become obsolete. But we have been optimistic that this is not prone to occur in the near future. And to support our predictions the recent reports from Gartner indicate a growth in the personal computer shipments in the second quarter of 2018. This is the most important growth trend that has been observed after 6 years.

What do the results show?

A majority of the sales have been from the top brands in the personal computer market. One point that should be noted is that the sale figure growth has been in the business market. In the consumer market things have not changed much. There is still an increasing number of home users buying laptops and tablets in place of a desktop computer. We cannot blame them- given the sleek size, ease of use, portability and the easy plug and play option that these offer, even in a small home one doesn’t have to squeeze out a large space for a desk as required by a personal computer. This kind of behaviour from the customers has clearly shown that the growth that has recently been observed is not an indicator of the potential recovery. Even if the market appears to recover, it is very difficult to predict whether this recovery is going to be a long term one.

There were 62.1 million desktop computers sold which is a 1.4% growth from the previous quarter. Though it appears to be a small number it is still making the PC manufacturers feel more optimistic to focus on this product line.

What could be the reason for the growth?

Though the exact correlation has not been pinned down Gartner points out that the recent Windows 10 upgrades for business could have been a driving force. In the consumer segment however, following the trend that has prevailed in the recent years there has been a drop in the sales figures. The forecasts have been broken in the business market alone.

Will consumers get back to buying computers?

Consider the general occasions where a home user might be using the computer- it could be for budgeting, documenting important events in the calendars, shopping, payments, accessing the social media sites and to watch movies or play games. Here, for gaming and for watching movies, desktop computers with their larger screens are slightly better than the smartphones but if the user owns a laptop this need is ruled out as well. And not to forget, there is the trend of smart TVs with big screens and internet connectivity! For the rest of the activities however, like banking, shopping and payments, most of them occur through mobile apps, on the go. The app interfaces are now sleek and responsive. There are even several businesses that have gone to the mobile-only strategy. So if this situation continues, the consumer computer business is less likely to grow again.

Business applications work well on the computers and now with the need for superior hardware to handle all the sophisticated new technologies like artificial intelligence and machine learning being used nearly everywhere, the business computer segment is likely to boom.

With the hardware on the laptops getting better and with several premium model with the most reliable features available for the business users and for gamers, we cannot still be sure whether the computers would still be sticking around for some more time. We would have to wait to understand the current demand to find out if it is merely a bubble or a trend that would stay.