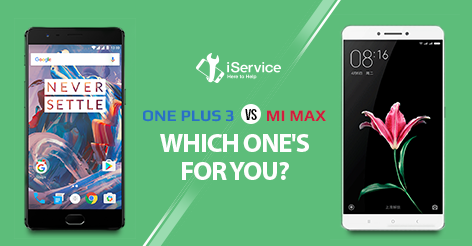 Mobile technology giants are just testing the greed of people for new tech with the launch of more and more advanced devices. Xiaomi released its biggest device, the Mi Max ‘Phablet’ recently in May 2016, which co-incidentally is the biggest in the mobile device market also. OnePlus also launched their new ‘Flagship’ device, OnePlus 3.

Mi Max is a ‘Phablet’ by design which places it in between a smart phone and a tablet. With a large 6.44 inch display screen this smartphone has a screen resolution of 1080×1920 pixels, full HD. This mobile comes with two special modes, the Sunlight Display mode and the Reading Mode. In Sunlight Display, the phone’s display can be kept to maximum while in reading mode; a yellow hue is present in the night.

At 5.50, OnePlus 3 is shy of 0.94 inches. With 1080×1920-pixel screen, OnePlus 3 provides competition to Mi Max. The new OnePlus phone has the ability to tune the colour temperature and switch on the ‘night mode’ which making it easier to view your phone in the night.

OnePlus 3 has a 16-megapixel Primary Camera with a Sony IMX 298 sensor, and an 8-megapixel sensor, 1.4-micron pixels equipped front camera to take the best selfie.

Both these mobiles are qualified enough to record videos at Full HD too. This makes both the mobiles a good investment when it comes to the camera.

Supplying juice to a 6.44 inch screen smartphone, Xiaomi Mi Max has a 4850mAh battery capacity. The power of the battery is very strong according to the company, as it can stream videos for 14 hours on a single charge connecting to the Wi-Fi.

On the other hand is the OnePlus 3 which has a 3000mAh, non-removable battery. This time the company has come up with some fast charging technology in this phone.  The phone is able to get charged up to 60 percent in mere half an hour and within an hour, full capacity can be reached.

The price range of the Mi Max in India is in question as this gadget hasn’t been launched in India yet. It is going to be launched on the 30th of June. However when it comes to OnePlus 3, since its launch on 15 June, it has been priced at around 27,999 rs.

With such immaculate designed devices, smart phone fans are sure to have a field day weighing the pros and cons of both the mobile phones.

Mi Max or the OnePlus 3, both the phones are beasts when it comes to their performance. Both the mobile companies have produced technically strong phones with stronger features. Irrespective of whether which phone has better specification, smart phone users can buy both the phones according to their budget and their requirements.

If you’re deciding which one to pick up. It comes down to which brand you really prefer. Both offer the same experience more or less with the exception of one having a bigger screen than the other.