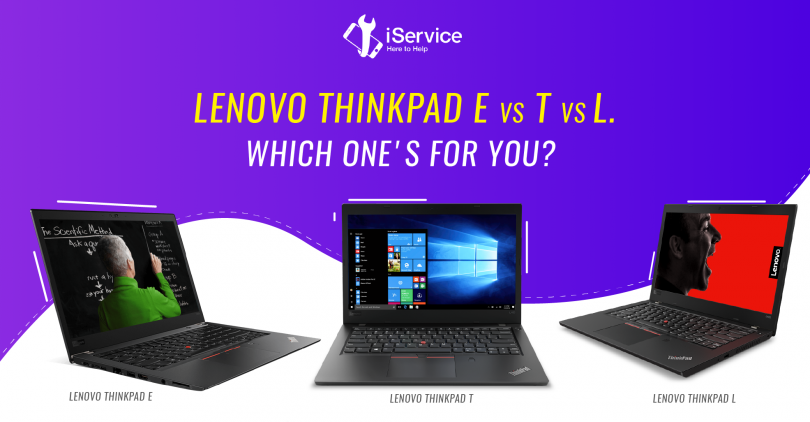 When you ask around for recommendations in laptops the Thinkpad from Lenovo is sure to be on the list. Among the various Thinkpad laptops the T series, E series and the L series are the most popular. But is it very confusing to understand what each series is all about? Then this Lenovo Thinkpad series comparison will help you understand which one would be right for you based on your budget, usage and requirements.

For business use there are very few premium laptops that can compete with the Thinkpad T series. Characterised by the solid build and the minimalist looks it is close to two decades since this series was first ever launched the T20 being one of the first to create a huge impact in the market. Whether it is a long battery life or a tough and reliable build quality or blazing speeds and dependable performance that you need the T series has it all. This is the number one choice for those corporates looking for a powerful laptop for the office use. So if you are looking for an all-rounder that is top in the line in terms of the performance, one you can rely on for all your professional usage, one that can help you carry your work with you anywhere you go then the T series is the perfect choice.

What makes the T series special?

For those who are looking for a laptop for business use but unwilling to spend a huge amount the L series has plenty of options. These laptops are affordable variants of the T series laptops but there is no compromise on the features and the performance. The first ever laptop in the L series came as a replacement of the then popular R series, in 2010. These laptops are available mostly in 14” and 15” variants.

What makes the L series special?

For those who are looking for laptops that are not too sophisticated, ones that would not break the bank the E series is the best choice out there. Do not underestimate these laptops looking at the price tag. They might not carry all the best features in terms of the hardware as with the T or L series but they are reliable and suitable for basic professional usage. The E series is no less than the higher end laptops in terms of the security features and is a great choice for small businesses. E series, or the Edge series was also introduced in the year 2010. It is definitely not a set of premium laptops but with the affordability offered these laptops do carry some surprisingly cool features, a decent battery life all packed into a portable form factor.

What makes the E series special?

So which one should you buy?

For premium features, if you do not have a limit on the budget the T series is definitely the winner. But some do not like the bulky profile it carries. So for such users the L series would be a close choice with a reduction in the price as well. If you are tight on your budget, if you do not mind the not so great build quality, then the E series would be a good option.

If you are facing any issues with your ThinkPad, be sure to get help from iService for quick service with warranty!