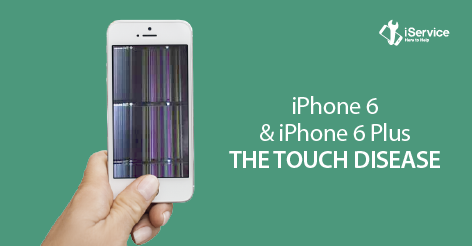 Recently in the world of Apple, there has been discussion about the issue plaguing a growing number of iPhone 6 and iPhone 6 plus users. This plague is referred to as the “Touch Disease”, a hardware problem that is causing iPhone displays to become unresponsive and feature a thin gray flickering line along the top of the screen.

Now, a trio of iPhone users have filed a lawsuit against Apple over the issue claiming that Apple has refused to repair devices that are affected for free. Hence, there’s been a general mistrust that is threatening to unfold the Apple market.

“Touch disease” is the name given infamously by users to the peculiar problem affecting some of the iPhones. There have been complaints where iPhone users have found that their devices have suddenly stopped working properly, their touch ID sensors completely stopped functioning and a thin gray bar flickered along the top of the screen.

There hasn’t been any word from Apple about it yet, but it seems like it is caused by faulty touch controls for both the display and the touch ID fingerprint sensor.

WHO IS IT AFFECTING?

This problem is as of now faced by iPhone 6 and iPhone 6 plus owners. Hence, there is a speculation that this must be due to a faulty design in these Apple phones specifically.

The touch controller chip doesn’t have under fill between it and the logic board. Under fill is basically glue that holds a chip in place, so without it, the chip is more susceptible to being knocked around and de-soldered. This is definitely a signature failure.

WHAT DOES APPLE SAY?

The crux of this recent issue is that Apple has failed to acknowledge this problem worthy of repair or replacement. Since most of the phones are out of warranty, and Apple doesn’t do advanced fixes, which leaves customers with the only option of buying a new iPhone.

TOUCH DISEASE IS MUCH DEEPER THAN THE SCREEN

The real issue is that just fixing the screen isn’t going to be enough. It doesn’t resolve the problem, because the grey line shows up even in the new screen. According to some of the reports from repair specialists, the screen isn’t the problem at all. It might be the two touchscreen controller chips that maybe causing the problem.

These two chips translate your finger mashing on the phone to the display on your iPhone being used. So if the touch IC goes bad, no matter what the user does, the screen shall not function.

Unfortunately, Apple repair aren’t equipped to make specialized repairs for such an issue. The issue is really widespread and Apple should be addressing this issue.

HOW TO FIX TOUCH DISEASE

Apparently, putting pressure on the screen allows the chip to make full contact with the board again, according to experts. However, it is not a permanent fix. The only permanent fix as of now is to replace the defective phone with a new one.

If there are users who are experiencing this peculiar touch disease and are still under warranty, they stand a high chance of getting the issue fixed. But, there is no guarantee that this fix would be a permanent one.

If your phone is out of warranty and is damaged because of this, some repair technicians may be able to fix the damage. However, the cause of malfunctioning requires more specialized repairs.

With the launch of iPhone 7 soon, any Apple customer looking for an upgrade would do so from the two year old iPhone 6. This puts pressure on the company to address the “touch disease” problem, because by the looks of it, this issue is hard to ignore.