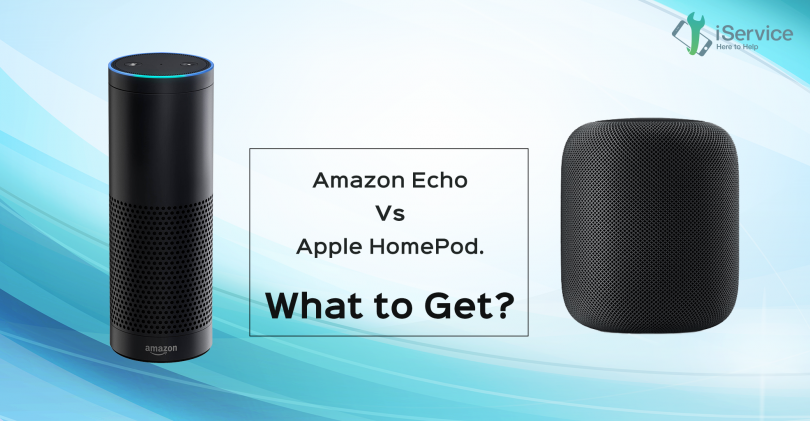 Can you believe that it has been 8 months since we were first introduced to HomePod? Are you looking for a sound quality like never before or are you looking for a more flexible ecosystem? Are you willing to pay more and get a single slick looking smart speaker or do you want to stock up more than one speaker at that price? That pretty much sums up the decision of choosing between HomePod and Echo.

Echo has been in the market for quite some time. So we have enough time to explore all the features on this one. There is also the Echo dot which is a more compact and a budget friendly option. But with the HomePod, this is a newcomer in the market. Talks about Apple working on a smart speaker has been around for several months.The release was also postponed further from the stipulated time. And finally this one is available in a few countries.

Apple is late to join the league of smart speakers but has it come with a bang as expected usually of Apple? Is the huge price tag really worth it or are you better of buying an Echo instead?

Apple HomePod vs Amazon Echo – Comparison of the specs and features

That was just a glimpse at what these two smart speakers pack under the hood. In different ways both are equally tough contenders to the others in the market of smart speakers. But how do you know which one you should buy?

Apple HomePod – Why should you buy it?

Well, it is the first ever smart speaker made by Apple and if you are an Apple enthusiast you might definitely want to consider buying this one. The sound quality delivery on this one is the first feature that would make you fall in love with it. It might not hit you initially. But try listening to different genres and you would notice a pronounce difference. The bass boosting ability is truly stunning. And there is a pristine clarity and richness about the output that you would notice.

If you are deep rooted in the Apple ecosystem this is a speaker that is going to up the ante. A home entertainment system in a modern home is not complete without a smart speaker. So this one would surely fill that void. One distinguishing aspect about all Apple products is the user-friendly interface. This one is no exception. Setting up your HomePod soon after you grab it out of the box is a breeze.

Amazon Echo- Why should you buy it?

In terms of the design, Echo looks simple and clutter free. When it comes to the features Alexa, the Echo to be precise pretty much impresses on the first go. If you are an avid shopper on Amazon, then Alexa on Echo would be very handy.

As of now Alexa is more efficient than Siri on these smart speakers, both in terms of their functionalities as well as in terms of their ability to understand the commands. Placing a call or sending a text and other such frequently used functions of your smartphone can easily be performed from Echo but that is something you might miss on HomePod. In HomePod you would be able to access the messages or ask Siri to read the messages if the devices are both connected in the same WiFi network.

The price tag of this device is one of the most attractive given the capabilities of Alexa and the features that this speaker comes with. Third party integrations can be done without an issue. Turning off the microphones is simpler on Echo and the status is indicated by the lights on the device.

HomePod is slightly better in terms of the hardware and the performance. Siri would not be able to differentiate voices but Echo can do that. If you are looking for easy third party integrations then Siri might not be of help.

HomePod is another product from Apple that takes you strongly into the Apple ecosystem and there are limited options when it comes to the sources for music streaming. The honest reviews about HomePod now recommend waiting for further upgrades and additions to really make a decision. Till that happens it is best to stick with your Echo.

For more great content, check out our other blogs here. For all your device repairs, be sure to head over to iService.