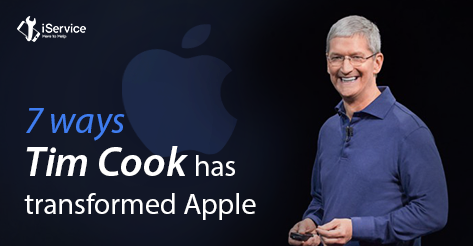 Some believe that Apple has outgrown its golden period. Earlier, every 2 or 3 years Apple was launching a new product- iPod, iPhone, iPad, Apple TV, there were major releases frequently. But in the recent years, the only new line of products from Apple has been the Apple watch. So, not all investors are happy with Cook. 2016 hasn’t been good for Apple.  Apple’s position in the market also shows that the company really has to get back on track and release something big! Something big enough to bring that Apple spark back.

With all the mixed views on how Cook has been carrying Apple for the past 6 years, here are the 7 ways in which Cook has changed Apple ever since he became the CEO:

Earlier, iPhones and iPads were all about glass and metal. The slick styling and the minimalistic sophistication were what the Apple products always boasted of. But in the recent years, Apple has seen more colors, and Apple has seen plastic as well. The iPhone 5C was released with a plastic body in vibrant colors. The design of the iPhone has also been tweaked. iPads are smaller with iPad mini and iPhones are now larger, slimmer and look and feel different than the previous ones. Cook has managed to keep iPhone design on par with the latest trends. And getting into the fashion accessory segment, Apple also has started making Apple watches.

One thing that has noticeably improved in Apple since Cook took over is the corporate social responsibility of the company. It has become more charitable. Cook has been noticed for his philanthropist activities ever since he became the CEO of Apple. Apple is now more involved in several social causes. Even within the company, there has been an improved diversity in the workforce.

With Jobs on the lead, there were just a handful of small acquisitions by Apple. But with Cook, there have been some large acquisitions. Acquisition of Beats Electronics has been the most popular ones in the recent years. There were also few smaller acquisitions of companies for specific improvements on Apple’s products, like some companies that were acquired for making Apple maps better. Cook didn’t stop with acquisitions. He has also made some partnerships. For iOS enterprise apps, Apple is partnering with IBM.

The one thing that Jobs was criticized for was not focusing enough on the investors. But Cook has been trying his best to keep investors as well as shareholders happy. Apple’s program for the return of capital to shareholders has had a lot of appreciation. Share buybacks was not something that was happening under Jobs. Whether or not the company has benefitted from this new program by Cook, shareholders are definitely happy.

Under Jobs Apple has been known for secrecy and the stringent security procedures. But with Cook, workplace in Apple is now more collaborative. Cook believes in keeping teams together and collaborating in the projects to ensure a smoother progress. This reform in the workplace at Apple has also resulted in marked changes in the services especially the company’s online services.

Instead of creating too much mystery, instead of withholding a lot of information from the public and media, Apple now has a refined media and public relations system. The fact that iPhone sales recently went down also lead to further improvements in the marketing and media relationships of the company. Apple is in the news often. Media interviews are welcomed and there are wider marketing campaigns as well.

Though there have been not many major releases in the recent years from Apple, there has been a myriad of products released in each product lines. There are more variants of the phone in each model, wider range of color options and more. To cater to the low budget segment, iPhone SE was released. To focus on the falling market of Apple, there are plans to establish a manufacturing unit in India.

There have been few ups and few downs for Apple. Investors are not really happy but shareholders are. There haven’t been major new releases but each product comes with larger number of variants. So the path so far, for Apple, under Tim Cook has been a bumpy one, yet a steadily progressive one. With the major reforms he has in plan for Apple, we can surely expect Apple to transform in a lot of ways in the coming years.

For any help with your new iPhone, for service queries and more, get in touch with us here.