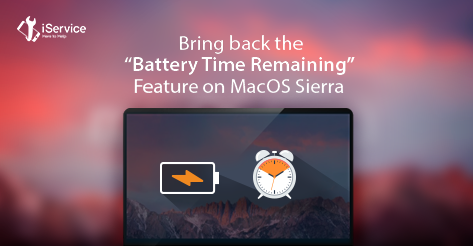 MacOS Sierra was met with generally positive reviews initially. The latest update brought about a slew of changes that were well received by many users. But with all that positive reaction, many seemed to overlook a minor change. 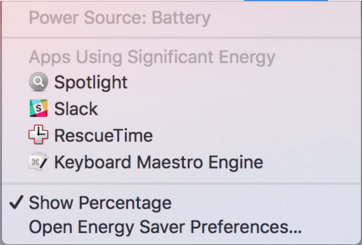 Notice the difference between the two screenshots? You’ll see that the “time remaining” feature has been subtly removed from the drop down menu when you click the battery icon on the top left of your screen. What’s even worse is that, there’s no setting to bring this feature. It just seems to have completely vanished without a trace. While this isn’t one of the more common issues for Mac users, it’s a pain.

This change seems to be annoying more than a handful of Mac users as the estimate feature can prove to be quite useful even with the constant fluctuation of the battery from time to time. Critics have also furthered this by stating it as an elaborate plan by Apple to cover up poor battery life on the MacBook specifically.

WHAT CAN BE DONE?

While at this point, there’s still no official fix allowing users to view the battery time remaining, you could try third party apps that can just as well assist you with this issue. If you’re considering a third party app, you could look at an app called Battery Monitor. What’s incredible about this app is that it sits alongside you’re your menu bar just as your normal battery widget does. The same can apply to your notification center too.

This is usually seen as the most common way around. The icon sits next to your battery icon itself. Upon clicking it, you will be presented with a drop down menu that gives you all the information. 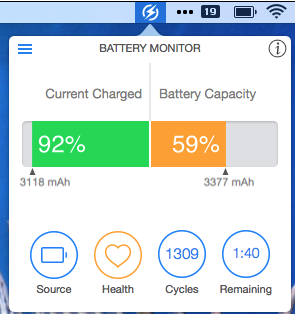 Upon clicking the options menu on the top left of this menu, you can further make some further configurations by selecting preferences. The kicker here is that you can select an option called “Show Charge Indicator” 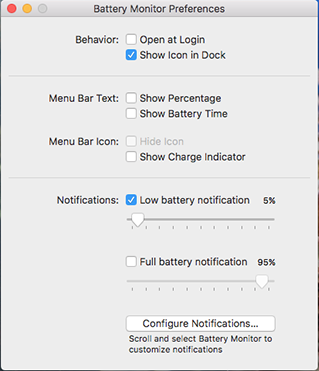 It makes your app icon look exactly like the original battery icon on your Mac, so much so that on first glance, it’s almost impossible to even tell the difference. You can then remove the original logo as you probably won’t need it for a while. Also within the preferences menu, you can also highlight options such as “show percentage” as well as “show battery time” which by now, as you’ve guessed it, allows you to see the battery time estimates. 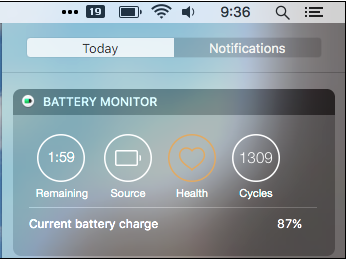 You’ll notice immediately that the widget shows you everything you need. While it’s not the way you’re used to, it’s a welcoming change.

YOU COULD CONSIDER THE ACTIVITY MONITOR

If you’re not looking to download a third party app or furthermore, not the kind to constantly keep track of your battery time estimates, the other alternative that you can consider is the Activity Monitor. If you’re used to using a Mac, you’re probably already aware of this. Otherwise you can find it in Applications>Utilities. 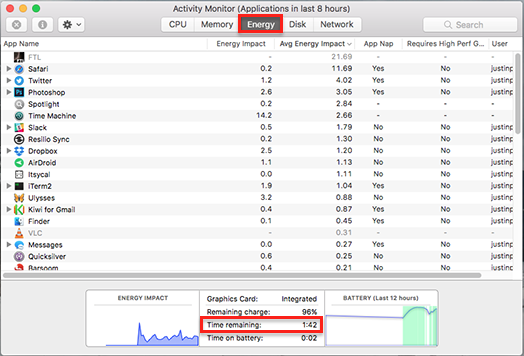 While the process is relatively longer than what you’d usually do, it seems like the more natural alternative to this issue. But again, it applies if you’re not looking to install third party applications, and is quite convenient to spot.

A majority of you’ve probably never really considered this option. But there is another way to see the remaining battery life along with the estimated time. This can be achieved by using the Terminal which can be found in Applications>Utilities.

Once opened, just type the following:

“pmset -g batt” and then hit enter. You will be presented with all the information you need with regards to your battery and the battery life. Agreed, this isn’t the most conventional of methods, but can be used as an alternative if you’re keen to know.

These are a few methods you can consider as alternatives. Hopefully, we’ll see a soft update from Apple in the future that should fix this. If you’re having trouble with your device, be sure to bring it over to iService.