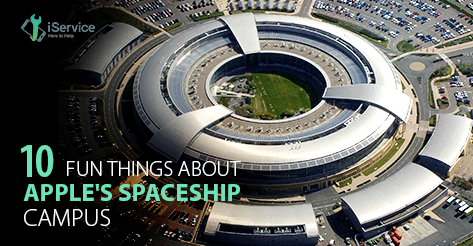 Way back in 2011, it was said that Steve Jobs has aspirations to create what was supposed to be the best office building the world had ever seen. Five years later, this office came to be known by many as the “Spaceship Campus” due to its flying saucer-like design, which is expected to be completed by mid 2017. Current CEO, Tim Cook has worked hard to deliver on this and it’s fair to say that the late Steve Jobs’ wishes have come true.

While many criticized and praised the project overall, one thing can be certain: the project was ambitious by Apple. Here are a few fun things about Apple’s Spaceship Campus.

With the project set to be completed later this year, Apple seems to be on track to fulfil on such aspirations. Many would claim that Steve Jobs would’ve been proud at the progress the company has made so far and the Apple Spaceship Campus only adds to it. Now, all that’s left is for the company to continue delivering world class premium products such as the much talked about iPhone 8 or the new slew of MacBooks.

For more content, visit our blog. If you’re a customer in need of getting your device fixed, visit iService.